Identical-looking ‘assistants’ acting together with a giantlike figure, a scenario on a stage, perhaps a ritual from a fantastic world. The figures in Dirk Lange’s drawings are recruited from the subcultures that spread like wildfire all over the globe via the Internet and mobile terminals. Their models are the visual and narrative elements in computer games in which nostalgia, escapism, and a light-hearted eclecticism are as important as an interest in the technology and the desire to network. The miniaturization and mobilization of experience is a phenomenon that binds the fairytale world and souvenir culture of the nineteenth century with the media culture of the twenty-first, and, perhaps, begins with the story of David and Goliath. In Den Riesen schlafen legen [Putting the Giant to Sleep], past and present ideas of the small, nimble character and the huge, slow one encounter one another in the medium of a drawing. 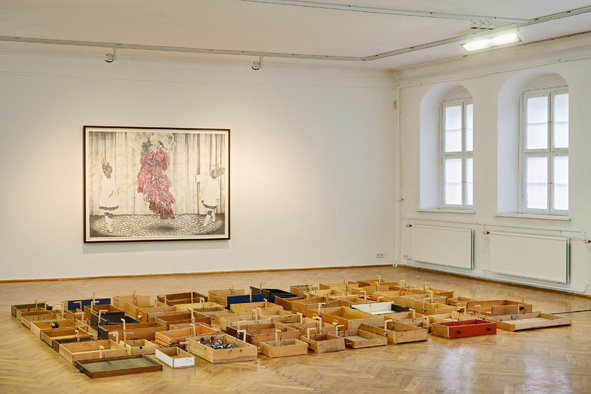