The short animated film, Superflat Monogramm, was made in 2003 as part of a collaboration between Takashi Murakami and Louis Vuitton, the luxury brand manufacturer. Alice in Wonderland in an age of mobile communica- tions: Aya, a little girl, is waiting for her friend outside one of the company’s branch offices when a panda bear — also designed by Murakami for Louis Vuitton — eats her cell phone, and, immediately thereafter, the girl herself. Inside the panda she searches for her phone but gets lost in the dizzying world of logos. After she has received a number of worried text messages from her friends because she is not reachable, she eventually returns to the normal world. As with other clips by Murakami, this one concerns closeness and friendship and, as an advertising clip by an artist, it is a document of the times, preserving the intentional emotional charge of technology wedded to the world of consumer goods at the turn of the millennium. 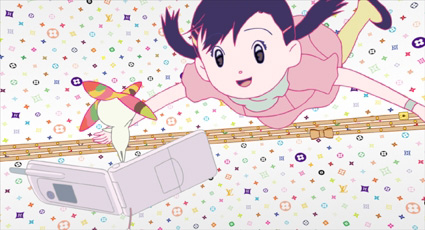